Naxos has been considered the go-to destination of Greece the past few years, as it has a long and colourful history, unique physical geography, genuine hospitality and alluring culture. The island certainly has many activities on offer and here are some suggestions.

Naxos has countless beaches, especially on the south-western part of the island. Some are rather busy beaches with organised sun-beds and umbrellas, beach-bars, cafes and restaurants, while there are others that are completely isolated for those who value their privacy.

Visit the attractions and museums

The Temple of Apollo or the ‘Portara’ as it is otherwise known, is considered the symbol that represents the island of Naxos and is the very first thing one sees as the ferry reaches the port. A monument that is said to be the only remains of a 6th century BC Temple dedicated to the God Apollo, it is a huge marble doorway that stands on a small peninsula that is connected to Naxos Town by a small ridge of land.

Another tourist attraction that is definitely worth a visit is the Venetian Kastro, which consists of stone buildings, paved paths, courtyards, archways, and beautiful alleys. Walking around the Kastro which was built in 1207, you will see a number of Venetian residences, a 13th century Catholic Cathedral, a French school, and an Archaeological Museum.

The Temple of Demeter, the goddess of grain, also constructed in the 6th century BC, should definitely be on your list of places to visit, and can be easily reached by bicycle. 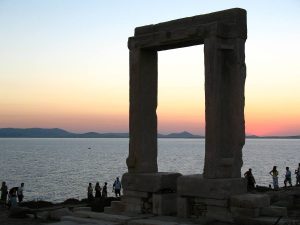 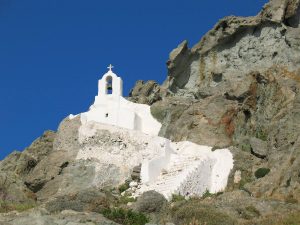 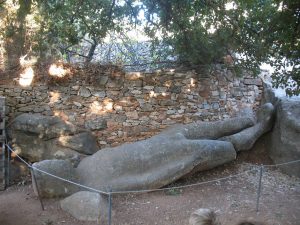 Thanks to Naxos’s amazing physical geography, hiking is an ideal activity that one can take up during their stay. There are many old stone footpaths that cross the centre of the island and connect mountainous villages, Venetian Towers, ancient cites and ruins. One of the most famous hiking route is the one that begins in the village of Melanes and continues to the deserted Monastery of Kalamitsia. Moreover, another famous hiking route is that of mount Zeus, the highest mountain of the Cyclades.

The last few years Naxos has become the number one destination for wind-surfers and kite-surfers. Thanks to its ideal wind, Mikri Vigla beach, Orkos, St George’s beach and the Laguna are the best places for both windsurfing and kite-surfing on Naxos. Some more adventurous activities that you can try while visiting Naxos are scuba-diving and horse-riding. You can go horse-riding on the beach at sunset or you can explore the crystal-clear waters of the Aegean Sea.

There are many small ferries that offer day trips to the smaller islands of the Cyclades such as Amorgos, Koufonissia, Iraklia etc. There are also yachts you can hire that will take you to deserted beaches that you cannot otherwise reach.

Naxos is very famous for its many beautiful inland villages some of which are the best places to go in order to taste the authentic and exquisite local cuisine and wine; Apiranthos, Halki, Filoti, Koronos and Potamia to name a few. The genuine hospitality of the people in these villages is unprecedented. Furthermore, in most villages you will find compelling museums and other interesting historical artefacts.